The Journey to success 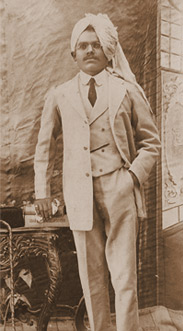 The journey from Prabhulal Dayaram Dwivedi to Kavi Prabhulal Dwivedi was punctuated with challenges. Working with a drama company was a stigma in Prabhulal’s family. Hence, his association with the troupe led him to being disowned by the family. Subsequently, the struggle for survival was eased by finding solace in his passion.

When ‘Arya Natak Samaj’ staged his first written play “Devi Vatsala”, the family came to know that he was a writer and not an actor. The family displayed warmth & urged him to return home. With his first major earning, Prabhulalbhai took his father on a pilgrimage.

Leaving Karachi, he went to Ahmedabad. An anecdote written by him for a ‘Shanti Bhuvan Theatre’ play, earned appreciation from experienced actors and directors. He then turned to professional play writing.
He aimed for the kind of simplicity in his writing, where an audience consisting of visually challenged & hearing impaired people could also comprehend & enjoy the play.

In 1917 ,”Ahilyabai” & “Veer Krunal”, written by him were staged in Surat, During that time he met Kavi Raghunath Brahmbhatt. Prabhulal respected the Kavi like an elder brother for the rest of his life. In Mumbai, “Shankaracharya” was staged in 1918, but “Arunodaya” in 1920 enjoyed better success & appreciation. There was no looking back after “Arunodaya”. “Malavpati”, in 1924, had a successful run for three years, and changed the fortunes of ‘Shree Laxmikant Natak Samaj”. Songs from the play, “Hriday Na Shudh Premee” and “Ek Sarkha Divas Sukhna” continue to be popular among Gujaratis.

In 1928, Mulchand Mama persuaded Kavishree to join ‘Deshi Natak Samaj’. This association helped them enjoy further success in theatre. “Bhari beda ne huto najukdi naar”, a famous song from the play “Satta no Maad”, sold over one hundred thousand gramophone record copies, and set a benchmark.In 1931, Prabhulalbhai extended his association to ‘Lakshmikant Natak Samaj’. In 1938, he worked with ‘Deshi Natak Samaj’ for “Vadilon na vanke” , which attained an epic status.

On turning 51 in 1942, Kavishree’s “Vanpravesh” was planned by the Drama group to be celebrated in a grand manner. However, since curfew had been enforced in the city due to communal riots, staging of the play was discontinued. During this challenging phase, instead of five-and-a-half hour long natak, Kavishree wrote shorter Natikas of two-and-a-half hours. This helped the drama company to earn better with larger audience turning up for the plays.

In 1951, Prabhulalbhai’s Shastipurti (60th birthday) was celebrated by staging one of his most admired work , “Vidya Variddhi Bharvi”. This play was based on the life of Kavi Bharvi. This is when Professor Madhukar Randeria and Chandravadan Bhatt began their association with Kavishree.

After the Shastipurti, he was close to taking a sabbatical and relocated to Rajkot. Shree Damu Sangani shared his workload by assisting him. The easy paced life in Rajkot didn’t last long as ‘Deshi Natak Samaj’ compelled him to return to Bombay and continue his association with them.