Born in 1938, the same year that the iconic drama, ‘Vadilon na Vanke’ was staged for the first time, Vinaykant Dwivedi has been exposed since childhood to the grand staging of drama – be it mythological, historical or social. Those high voltage scenes and myriad settings, the backstage chaos, the masterpiece performances along with the live singing of the artists on stage, the ‘once mores’, all this left a deep impression on his young mind.

The love for stage and drama, got much stronger when they shifted their residence from Teen Batti, Walkeshwar to Bhangwadi, the seat of Gujarati drama in those times. The increased proximity to the theatre led him to spend his weekends watching dramas from the steps of the balcony or the back stage. This was the golden era of Deshi Natak Samaj and Bhangwadi was always teeming with activity and action. Being in and around theatre since childhood and with an illustrious father like Shri Prabhulal Dwivedi, who was a famous and prolific dramatist, it was natural for Vinubhai (as he is addressed by his family and friends) to be inclined towards drama and stagecraft.

He did his schooling from the Bazaar Gate High School. After completing his matriculation, he joined the Akashwani radio station under the guidance of Shri Gijubhai Vyas. Here, Vinubhai served as an announcer for 7 years, while he pursued further studies. On graduating with MA. L.L B., he joined Dena Bank, where he served for 26 years and his career progressed from an Officer to Chief Manager till he took an early retirement. 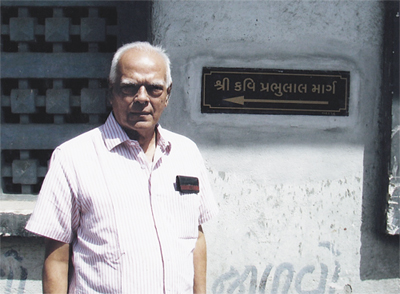 Vinaykant Dwivedi in Virpur near the street named after his father

While working at the bank, he still managed to keep himself connected to stage and drama so as to uphold the glorious heritage of his father. During the days of black and white TV, he produced a lot of shows on Doordarshan which were related to drama. Among them,‘Borsalli’ was the most popular show. In 1981, he staged a program called ‘Sambhaarna’, which was an attempt to revive the old style of gujarati drama. ‘Sambhaarna’ was a huge success and hence a company by the same name was set up by Vinubhai and his partners.

Under Sambhaarna, they staged 10 dramas which were produced and directed by Vinubhai. Some of them were adaptations of the famous ones staged in Bhangwadi like ‘Vadilon na Vanke’, ‘Shambhoo Melo’, ‘Gaada no Bel’, and ‘Maalavpati’ to name a few and some were written by himself like ‘Baaji Chopatni’ and ‘Pal na Pratibimb’. Vinubhai and Sambhaarna were like a bridge between the old world and new age Gujarati stage. Under this banner, some 40 old and forgotton stage artists were also felicitated and benefitted through charity shows.

Vinubhai has published around 9 books, written 3 dramas and innumerable columns and articles in various newspapers. In keeping with the changing times, he also produced a serial titled ‘Borsalli’ for the Gujarat Doordarshan . Even today, after crossing the milestone of 75 years and retiring from all his activities of drama and stage, he still continues reading, occasionally writing and never misses an opportunity to catch up on a good Gujarati drama on stage.